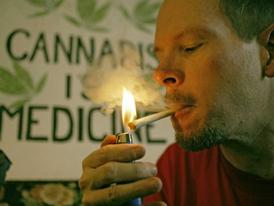 A new generation of medicine

Experts have been changing their minds too — recently, CNN's chief medical correspondent Sanjay Gupta reversed his opinion on medical marijuana.
While recreational pot usage is controversial, many people agree with Gupta's new stance, and believe that the drug should be legal for medical uses.
And even though the benefits of smoking pot may be overstated by advocates of marijuana legalization, new laws will help researchers study the drug's medicinal uses and better understand how it impacts the body.

Currently only 6% of studies on marijuana analyze its medicinal properties.

Keep in mind, though, that there are negative effects of smoking too much pot or using it for non-medicinal purposes. When overused or abused, pot can lead to dependency and mess with your memory and emotions.

There are at least two active chemicals in marijuana that researchers think have medicinal applications. Those are cannabidiol (CBD) — which seems to impact the brain without a high— and tetrahydrocannabinol (THC) — which has pain relieving (and other) properties.